Computed Tomography (CT) is a diagnostic procedure that uses special X-ray equipment to obtain cross-sectional pictures of the body. The CT computer displays these pictures as detailed images of organs, bones and other tissues.

Radiation exposure is minimized with the GE multi-detector LightSpeed CT Scanner at Carlsbad and the BrightSpeed Elite at Imperial Radiology. The multi-slice technology reduces radiation significantly. The scanner, in real time, alters the radiation emitted, depending on the thickness of the body part being scanned.

Use of thin slices without image noise or coverage compromise. 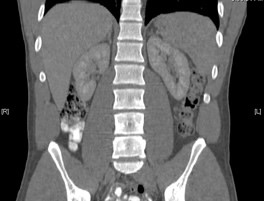 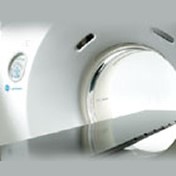 CT was discovered by a British engineer named Sir Godfrey Hounsfield and Dr. Alan Cormack. It has become a mainstay for diagnosing medical diseases. For their work, Hounsfield and Cormack were jointly awarded the Nobel Prize in 1979.
CT scanners first began to be installed in 1974. Because of advances in computer technology, CT scanners have vastly improved patient comfort because they are now much faster. These improvements have also led to higher-resolution images, which improve the diagnostic capabilities of the test. For example, the CT scan can show doctors small nodules or tumors, which they cannot see on an x-ray.

What are the risks of CT?

CT is a very low-risk procedure. You will be exposed to radiation when undergoing a CT.
However, it is a safe level. The biggest potential risk is if you need to get a contrast (also called dye) injection. This can help distinguish normal tissues from abnormal tissues. It also helps to distinguish blood vessels from other structures such as lymph nodes.
Like any medication, some people can have a reaction to the contrast. The chance of a fatal reaction to the contrast is about 1 in 100,000. Those at increased risk may require pretreatment. Anyone who has had a prior contrast reaction or severe allergic reaction to other medications, has asthma or emphysema, or has severe heart disease is at increased risk for a contrast reaction and is either pre-medicated, has the study without contrast or referred to a hospital x-ray department for the exam. Any time an injection is done into a vein, there is a risk of the contrast leaking outside of the vein under the skin. If a large amount of contrast leaks under the skin, in rare cases, this can cause the skin to break down.

How to prepare for CT?

If you are to have a contrast injection, you should not have anything to eat or drink for a few hours before your CT scan because the injection may cause stomach upset. To receive the contrast injection, an IV is inserted into your arm just prior to the scan. The contrast then enters your body through the IV.
Prior to most CT scans of the abdomen and pelvis, it is important to drink an oral contrast agent. This contrast agent helps the radiologist identify the gastrointestinal tract (stomach, small and large bowel), detect abnormalities of these organs, and to separate these structures from other structures within the abdomen. You will be asked to drink 2, 8oz. cups over 30 minutes.

What happens during the CT Procedure?

The CT scanner looks like a large donut with a narrow table in the middle, you rarely experience claustrophobia because of the openness of the doughnut shape of the scanner. Typically you lie on your back on the table, which moves through the center of the machine scanner, either head first or feet first, depending on the part of the body being scanned. For certain scans such as sinuses and middle ear, you would lie on your back and go through head first.
You must remain motionless for the length of the study, which is typically just a few minutes. The entire procedure, which includes set-up, the scan itself, checking the pictures, and removing the IV if needed, takes an average of 15 minutes depending on what part of the body is being scanned.

If you are pregnant, please notify your physician.

By logging into your account, you agree to maintain your confidential login information and to follow HIPAA regulations by accessing ONLY the records of your patient(s).